1. Plot a graph showing the variation of current versus voltage for the material GaAs.

2. Show a variation of resistivity of copper as a function of temperature in the graph.

3. Define the term drift velocity of charge carriers in a conductor and write its relationship with the current flowing through it.

4. Define the term and electrical conductivity of a metallic wire. Write its SI unit.

5. Show a variation of resistivity of Si with temperature in the graph.

6. Define the term mobility of charge carriers in a conductor. Write its SI unit.

7. Write a relation between the current and drift velocity of electrons in a conductor. Use this relation to explain how the resistance of a conductor changes with the rise in temperature.

8. When electrons drift in metal from lower to higher potential, does it mean that all the free electrons of the metal are moving in the same direction?

9. Show on a graph, the variation of resistivity with temperature for a typical semiconductor.

10. Two wires of equal length, one of copper and the other of manganin have the same resistance. Which wire is thicker?

11. Define the resistivity of a conductor. Write its SI unit.

12. Two identical slabs, of a given metal, are joined together, in two different ways, as shown in the figure. What is the ratio of the resistances of these two combinations?

13. Two conducting wires X and Y of the same diameter but different materials are joined in series across a battery. If the number density of electrons in X is twice that in Y, then find the ratio of the drift velocity of electrons in the two wires.

14. The three colored bands, on a carbon resistor, are red, green and yellow respectively. Write the value of its resistance.

15. Write an expression for the resistivity of a metallic conductor showing its variation over a limited range of temperatures.

18. State the underlying principle of a potentiometer.

19. Two identical cells, each of emf E, having negligible internal resistance, are connected in parallel with each other, across an external resistor R. What is the current through this resistance?

20. The emf of a cell is always greater than its terminal voltage. Why? Give reason.

21. A cell of emfε and internal resistance ‘r’ draws a current I.Write the relation for terminal voltage V in terms of ε, I and r.

4. Derive an expression for the current density of a conductor in terms of the drift speed of electrons.

5. A conductor of length ‘l’ is connected to a DC source of potential ‘V’. If the length of the conductor is tripled by gradually stretching it, keeping ‘V’ constant, how will i) Driftspeed of electrons and ii) Resistance of the conductor be affected?

6. Plot a graph showing temperature dependence of resistivity for a typical semiconductor. How is this behaviour explained?

a. You are required to select a carbon resistor of resistance 47 kΩ + 10%from a large collection. What should be the sequence of colour bands used to code it?

b. Write two characteristics of manganin which make it suitable for making standard resistances.

a. Brown, green, blue and b. Orange, black, green.

Find the ratio of their resistances.

9. A wire of 15 Ωresistance is gradually stretched to double its original length. It is then cut into two equal parts. These parts are then connected in parallel across a 3.0 V battery. Find the current drawn from the battery.

10. Derive an expression for drift velocity of free electrons in a conductor in terms of relaxation time.

11. Two wires X, I have the same resistivity, but their cross-sectional areas are in the ratio 2:3 and lengths in the ratio 1:2. They are first connected in series and then in parallel to a DC source. Find out the ratio of the drift speeds of the electrons in the two wires for the two cases.

12. Derive an expression for the resistivity of a good conductor, in terms of the relaxation time of electrons.

14. A potentiometer wire of length 1 m has a resistance of 10 Ω. Determine the emf of the primary cell which gives a balance point at 40 cm.

15. A potentiometer wire of length 1 m has a resistance of 5 Ω. It is connected to an 8 V battery in series with a resistance of 15 Ω. Determine the emf of the primary cell which gives a balance point at 60 cm.

17. Describe briefly with the help of a circuit diagram, how a potentiometer is used to determine the internal resistance of a cell.

a) Define the term ‘drift velocity’ of charge carriers in a conductor. Obtain the expression for the current density in terms of relaxation time.

b) A 100 V battery is connected to the electric network as shown. If the power consumed in the 2Ω resistor is 200 W, determine the power dissipated in the 5 Ω resistor. 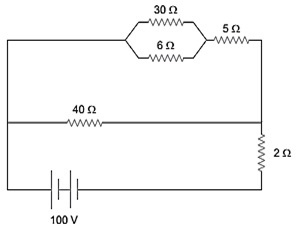 2. Define the relaxation time of the free electrons drifting in a conductor. How is it related to the drift velocity of free electrons? Use this relation to deduce the expression for the electrical resistivity of the material.

3. A network of resistors is connected to a 16 V battery of internal resistance of 1 Ω as shown in the figure. 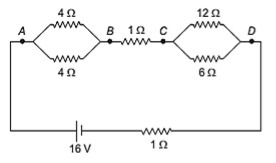 (a) Compute the equivalent resistance of the network.

(b) Obtain the voltage dropsVABand VCD

4. Calculate the steady current through the 2 Ω resistor in the circuit shown below. 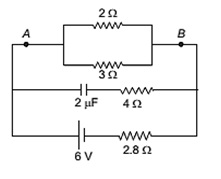 5. Prove that the current density of a metallic conductor is directly proportional to the drift speed of electrons.

6. Three resistors R1, R2 and R3 are connected in parallel, across a source of emfε and negligible internal resistance. Obtain a formula for the equivalent expressions for the current through each of the three resistors

7. Find the equivalent resistance of the given circuit and the current drawn from the battery. 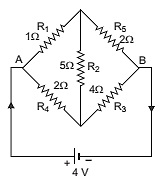 a. State the underlying principle of a potentiometer. Why is it necessary to i) use a long wire, ii) have uniform cross-sectional area and iii) use a driving cell whose emf is taken to be greater than the EMFs of the primary cells?

11. The figure shows a long potentiometer wire having a constant potential gradient. The null points for the two primary cells of emfsε1and ε2connected in the manner shown, are obtained at a distance of l1120 = cm and l2300 = cm from the end A.Determine 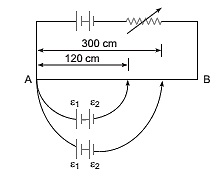 12. With the help of a circuit diagram, explain how a potentiometer can be used to compare the emf of two primary cells.

13. State the underlying principle of a potentiometer. Describe briefly giving the necessary circuit diagram, how a potentiometer is used to measure the internal resistance of a given primary cell.

14. A number of identical cells ‘n’ each of emf E, internal resistance ‘connected in series are charged by a DC source of emf, using a resistor R.

a. Draw the circuit arrangement.

b. Deduce the expressions for i. the charging current and ii. the potential difference across the combination of the cells.

a. Why are the connections between the resistors in a meter bridge made of thick copper strips?

b. Why is it generally preferred to obtain the balance point in the middle of the meter bridge wire?

Which material is used for the meter bridge wire and why?

16. In a meter bridge, the null point is found at a distance of l1cm from A. If now resistance of X is connected in parallel with S, the null point occurs at l2cm. Obtain a formula for X in terms of l l, l 2 and S. 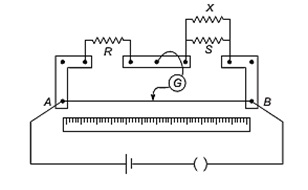 a. State the working principle of a potentiometer. With the help of the circuit diagram, explain how a potentiometer is used to compare the EMFs of two primary cells. Obtain the required expression used for comparing the EMFs.

b. Write two possible causes for one-sided deflection in a potentiometer experiment.

a. State the working principle of a potentiometer. With the help of the circuit diagram, explain how the emf of a primary cell can be determined using a potentiometer. Give the necessary equations used.

b. Which material is used for potentiometer wire and why?

c. How can the sensitivity of a potentiometer be increased? 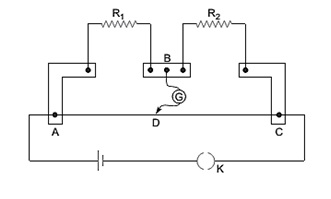 a. State with the help of a circuit diagram, the working principle of a meter bridge. Obtain the expression used for determining the unknown resistance.

b. What happens if the galvanometer and cell are interchanged at the balance point of the bridge?

Why is it considered important to obtain the balance point near the mid-point of the wire?