2. For any charge configuration, equipotential surface through a point charge is normal to the electric field. Justify.

3. Two charges and are placed at points A and B, 5 cm apart. Depict an equipotential surface of the system.

4. Why electrostatic potential is constant throughout the volume of the conductor and has the same value as on its surface?

5. Why the potential inside a hollow spherical charged conductor is constant and has the same value as on its surface?

6. Why there is no work done in moving a charge from one point to another on an equipotential surface?

7. A hollow metal sphere of radius 5 cm is charged such that potential on its surface is 10 V. What is the potential at the centre of the sphere?

8. Can two equipotential surfaces intersect each other? Justify your answer.

9. Draw the equipotential surface due to a single point charge.

10. Name the physical quantity whose SI unit is J/C. Is it a scalar or a vector?

11. A capacitor has been charged by a DC source. What are the magnitude of conduction and displacement current when it is fully charged?

12. Distinguish between a dielectric and a conductor.

13. Define the term dielectric constant of a medium. What is its unit?

14. A metal plate is introduced between the plates of a charged parallel plate capacitor. What is its effect on the capacitance of the capacitor?

16. What is a capacitor? On what factors, the capacitance of a parallel plate capacitor depends?

17. Define polar and non-polar materials. Give examples for each.

18. Define the term capacitance of a capacitor. What is its unit?

20. The following graph shows the variation of charge Q with voltage V for two capacitors K and L. In which capacitor is more electrostatic energy stored?

1. Two-point charges q1 and q2are located at r1 and r2, respectively in an external electric field E. Obtain the expression for the total work done in assembling this configuration.

3. Plot a graph between electric potential (V) and distance r due to a point charge Q.

4. Two uniformly large parallel thin plates having charge densities +σ and –σ are kept in the XZ – plane at a distance’ apart. Sketch an equipotential surface due to the electric field between the plates. If a particle of mass m and charge ‘–q’ remains stationary between the plates, what is the magnitude and direction of this field?

a. Draw the equipotential surfaces of the system.

b. Why do equipotential surfaces get close to each other near the point charge?

6. Find out the expression for the potential energy of a system of three charges q1, q2 and q3located at r1, r2 and r3 with respect to the common origin O.

8. A dipole with its charge – q and + q located at the points ( 0,-b,0) and (0,+b,0) is present in a uniform electric field E. The equipotential surfaces of this field are planes parallel to the YZ – plane.

a. What is the direction of the electric field E?

b. How much torque would the dipole experience in this field?

a. Can two equipotential surfaces intersect each other? Give reasons.

11. Draw the equipotential surfaces due to an electric dipole.

12. Two-point charges 4Q and Q are separated by 1 m distance in the air. At what point on the line joining them, is the electric field intensity zero? Also, calculate the electrostatic potential energy of the system of charges taking the value.

13. Define the dipole moment of an electric dipole. How does the electric potential due to a dipole vary on the dipole axis as a function of r, a distance of the point from the mid-point of the dipole at large distances?

14. Derive an expression for the electric potential at any point along the axial line of an electric dipole.

15. Two charges of 5 nC and – 2 nC are placed at points (5 cm, 0,0) and (23 cm,0,0)in the region of space, where there is no external electric field. Calculate the electrostatic potential energy of this charging system.

16. A parallel plate capacitor of capacitance C is charged to a potential V. It is then connected to another uncharged capacitor having the same capacitance. Find out the ratio of the energy stored in the combined system to that stored initially in e single capacitor.

17. Two identical parallel plates (air) capacitors C1 and C2 have capacitances C each. The between their plates is now filled with dielectrics as shown. If the two capacitors still have equal capacitance, obtain the relation between dielectric constants K, K1and K2. 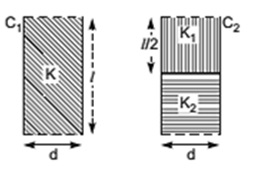 1. A wire AB is carrying a steady current of 12 A and is lying on the table. Another wire CD carrying 5A is held directly above AB at a height of 1 mm. Find the mass per unit length of the wire CD so that it remains suspended at its position when left free. Give the direction of the current flowing in CD with respect to that in AB. [Take the value of g = 10 m.s–2]

a. Depict the equipotential surfaces for a system of two identical positive point charges placed at a distance’ apart.

b. Deduce the expression for the potential energy of a system of two point charges brought from infinity to the points with position vectors respectively, in presence of external electric field E.

a. Two-point charges q1 and q2initially at infinity are brought one by one to points P1 and P2specified by position vectorsr1 and r2relative to the same origin. What is the potential energy of this charge configuration? Define an equipotential surface.

b. Draw schematically the equipotential surface corresponding to a field that uniformly increases in magnitude but remains constant in direction.

a. Derive the expression for the capacitance of a parallel plate capacitor having plate area ‘A’ and plate separation’.

b. Two charged spherical conductors of radii R1and R2when connected by a conducting wire acquire charges q1and q2respectively. Find the ratio of their surface charge densities in terms of the radii.

b. If this capacitor is connected to 100 V supply, what would be the charge on each plate?

c. How would charge on the plates be affected, if a 3 mm thick mica sheet of K= 6 is inserted between the plates while the voltage supply remains connected?

6. A network of four capacitors each of 12 µF capacitance is connected to a 500 V supply as shown in the figure.

a. Show that in a parallel plate capacitor if the medium between the plates of a capacitor is filled with an insulating substance of dielectric constant K, its capacitance increases.

b. Deduce the expression for the energy stored in a capacitor of capacitance C with charge Q.

a. Derive an expression for the energy stored in a parallel plate capacitor C, charged to a potential difference V.

b. Obtain the equivalent capacitance of the network given below. For a supply of 300 V, determine the charge and voltage across C4. 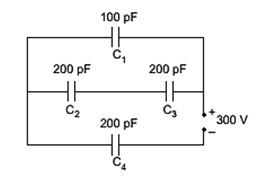